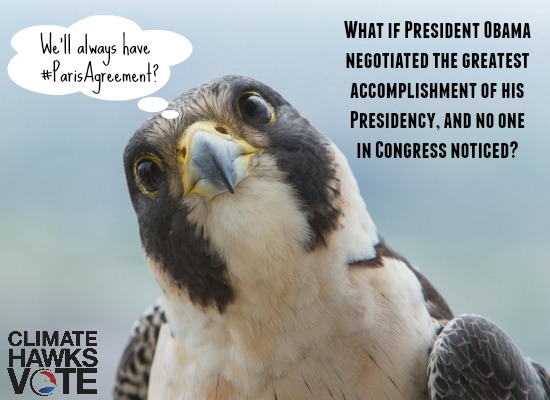 The Paris Agreement is being ignored by Democratic leaders such as Sen. Chuck Schumer, Sen. Elizabeth Warren, and Rep. Debbie Wasserman Schultz. Fewer than half of the House Democrats had anything to say at all. The vast majority of Republicans in both houses refrained from public criticism. In the House, those few who criticized the Paris agreement are deeply ideological and geographically diverse; in the Senate, they’re from fossil fuel states or –  Marco Rubio and Ted Cruz – running for President. We found one Republican who praised the agreement. Meanwhile, Bernie Sanders criticizes the Paris Agreement for not going far enough.

We found 89 Democrats who praised the Paris agreement, compared to 100 who had nothing to say. Among those who remained silent: wannabe Senators Ann Kirkpatrick (AZ-01), Loretta Sanchez (CA-46), and Alan Grayson (FL-09), and beleaguered DNC chair Debbie Wasserman Schultz (FL-23). On the other hand, some House members who aspire to the Senate did notice the Paris agreement: Patrick Murphy (FL-18), Tammy Duckworth (IL-08), Donna Edwards (MD-04), and Chris Van Hollen (MD-08).

Of special note:  Doris Matsui (CA-06), vice-chair of the House Sustainable Energy & Environment Caucus, and her graphics team, whose tweet was retweeted by 18 House Democrats.

One Republican, Carlos Curbelo of Florida, put out a generally positive press release.

Eighteen Republicans – generally among the most conservative members of the House – signaled opposition. The vast majority of House Republicans simply had nothing to say in public.

We found 28 Democrats in the climate hawk caucus, including ten Democrats who traveled to Paris to show their strong support (names in italics below). Seventeen other Democrats didn’t consider the issue noteworthy. Conspicuous by their silence: Chuck Schumer, widely expected to take over as leader of the caucus in 2017; Elizabeth Warren, now on the Senate Energy & Natural Resources committee; and Gary Peters, who ran in 2014 as a climate leader.

Bernie Sanders, running for President, sent a somewhat critical tweet from his Senate account, @SenSanders: “While the#ParisAgreement is a step forward it goes nowhere near far enough. The planet is in crisis. We need bold action now.”

Most Republicans in the Senate had nothing to say about the Paris agreement. The exceptions came from a handful of fossil-fueled Senators and two Presidential candidates, Marco Rubio and Ted Cruz.

Notes: Mike Lee issued a press release criticizing the omnibus spending bill with a swipe at the Paris Agreement, and remarks by Marco Rubio and Ted Cruz were both as Presidential candidates rather than from their Senate offices.

We examined the press releases, facebook posts, and tweets by every member of Congress since December 11 for statements regarding COP21 and/or the Paris agreement. For this report, we’re treating all content equally, whether a thoughtful press release or a simple retweet of a @whitehouse tweet.